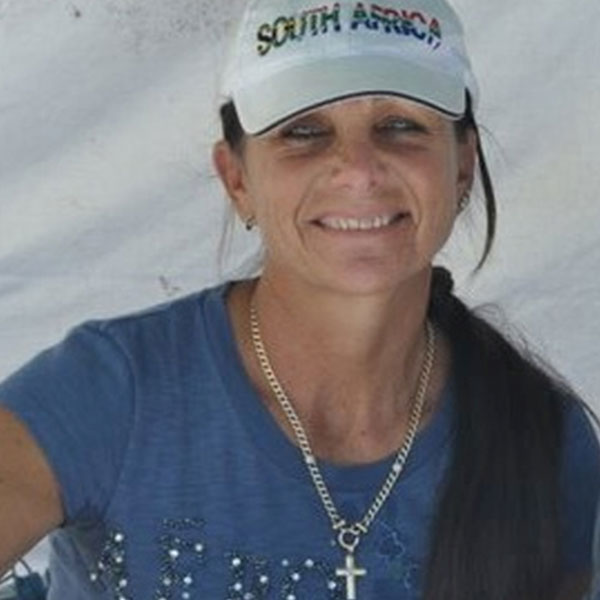 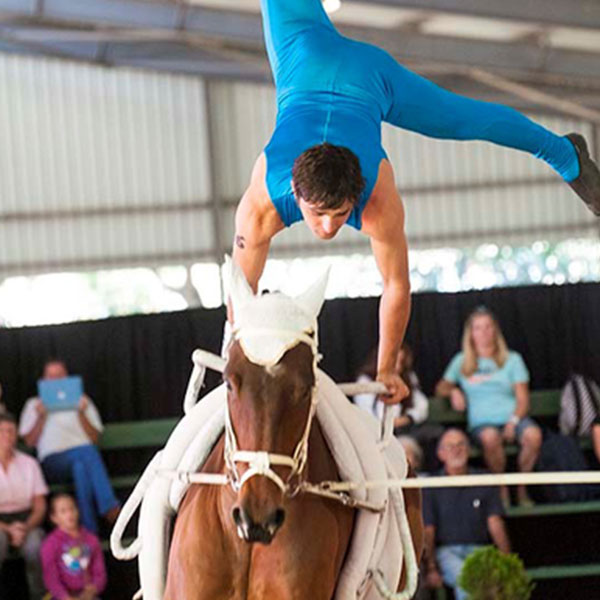 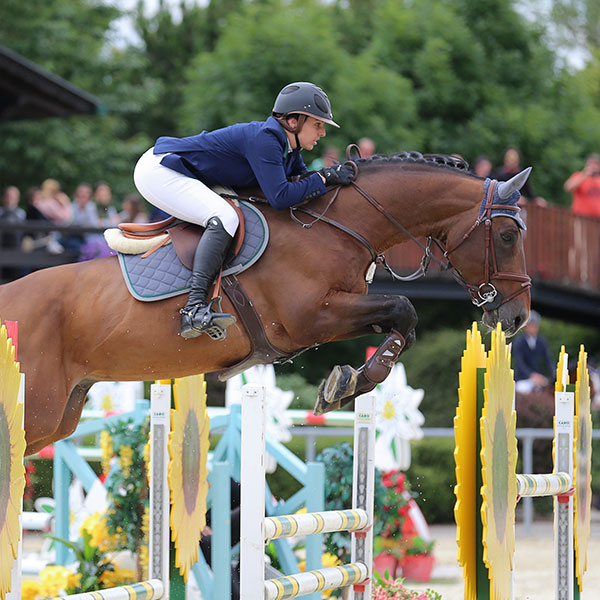 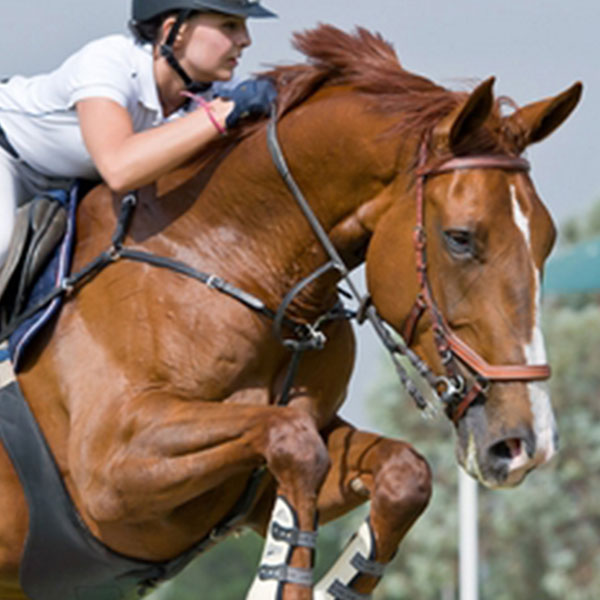 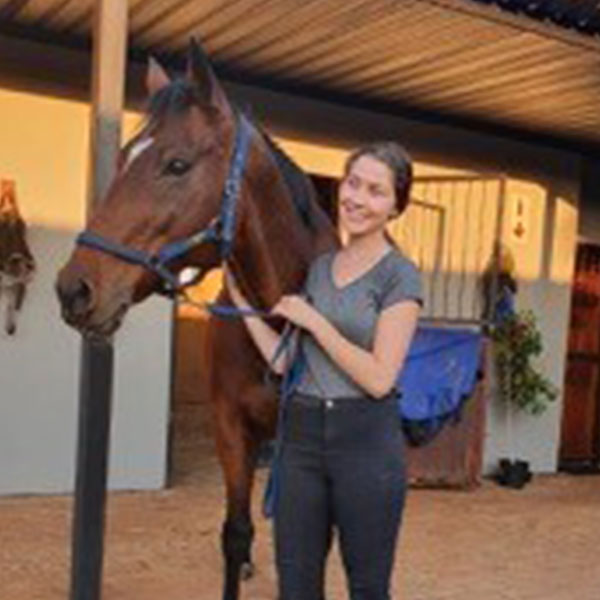 “My passion for horses developed when I was 5 years old. My aunt had opened her very own stable yard and suddenly my home was flooded with magnificent four-legged creatures and I have never looked back!

I started competing in SANEF shows when I was 7. I had many successful years, winning working riding classes, working my way up the showjumping grades and eventually even being ranked 25th on GHS for my show jumping level. But once I got my first horse, my life really changed.

Raps was an off the track thoroughbred that we bought. He was incredibly strong, spooky and clever and tested every bit of my riding ability and patience. With the right instructor, I finally managed to learn how to work together with him. Had my instructor not invested in my life, I would have quit riding- the very sport that truly brings me the largest amount of happiness and peace. Here my passion for investing in others really started to take shape.
I have developed a passion for horse rescue and I hope to one day open my very own rescue!” – Anel

Anel is excellent with nervous riders, showing great compassion and patience to every pupil. 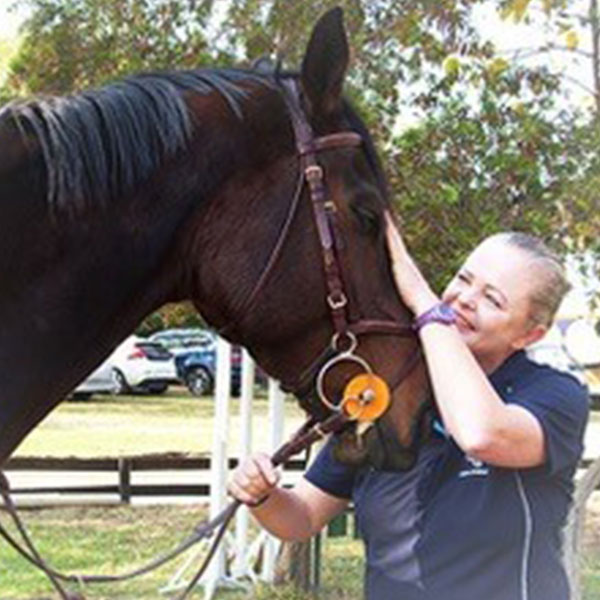 “I started riding at the age of 6. I have competed as a junior and adult quite successfully in many disciplines such as dressage, eventing and showjumping.

Some of my highlights were jumping at the post-Derby 1m class which was at the time still held at Inanda in Sandton and I also competed at the Sun City Indoor Showjumping competition. I have been trained by many instructors including Lachlan McLachlan, Ian Milligan, May Foxcroft, Shirley Green and of course, Barbie Gertenbach.

I moved my horse (and now horses) to Riba Stables almost 10 years ago and currently own Laurie (Classical Blues) and Daydream Jiveman.

I started teaching at Riba Stables 6 years ago and currently provide tuition in dressage, jumping, working riding and vaulting.

I have assisted many clients in bringing up young horses by teaching as well as riding their horses and have taught from very young beginner riders to more experienced riders.

I was also part of the SAPS Reservists Mounted Unit and we did many patrols on horseback in the Midrand area.” – Annelise 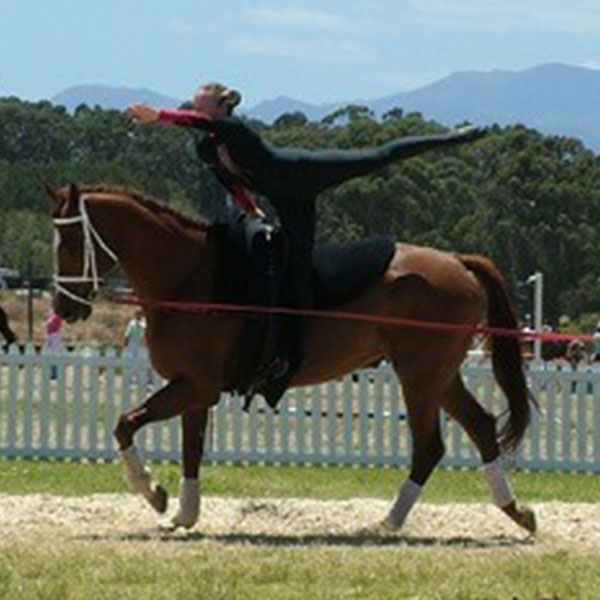 Donne vaulted some years back and competed for Gauteng.

She is a veterinarian by profession but has a talented daughter who vaults. Donne now teaches vaulting once a week.

She is also a good rider. 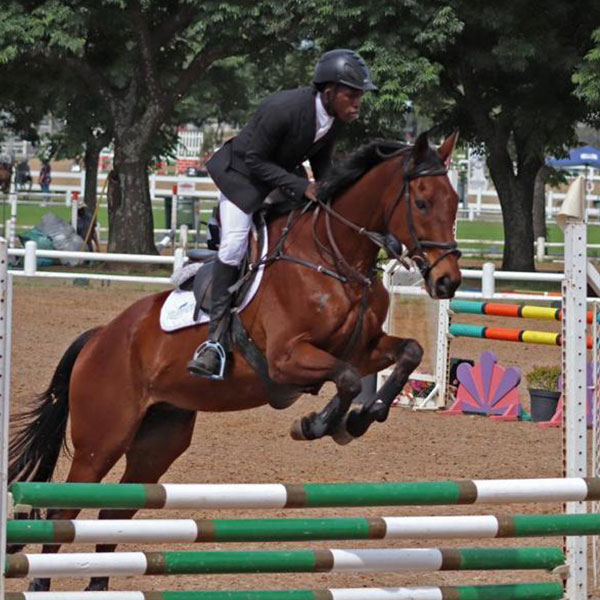 Nhlanhla started riding at the age of 13 with Enos Mafokate (Soweto Riding Centre). His main discipline was vaulting.

He went on to do Horse Mastership Modules 1 and 2 at Beaulieu College.

In January 2018, he approached Riba Stables for a job.

Due to his earlier focus on vaulting, he started to work on his riding skills with Barbie and Kayla. He started jumping in 70cm to 80cm classes and has now moved up to 1m. At his very first 1m show, he placed 2nd and has picked up many places since. In 2019, he placed 5th in the Invitational Class at Derby. In 2020, he placed 8th at the Outdoor Grand Prix.

He is an animal person with a great passion for horses and places the well-being of the horse first. With his likeable personality, he has become a firm favourite at Riba Stables.

Nhlanhla has learned a lot of Kayla. He says Kayla has taught him, not only patience with horses but in life as well. He currently helps Kayla bring on horses off the track for her KGE Second Career Initiative. From Barbie, he has learned to be firm but fair. As much as he finds it challenging, he perseveres in his flatwork lessons with Barbie.

He often gets comments from top riders who watch him – they say that he has really good ‘feel’. The improvement he is showing is due to the fact that he rides many different horses and he is passionate about learning from Kayla.

His dream is to one day own his own stable yard but his short term goal is to get a horse he can call his own. He is currently competing on one of Riba’s old schoolmasters called Chet Baker.

Nhlanhla is busy preparing for his lunging for vaulting exam.

Thank you to Natasha Williams who donated her dressage saddle to Nhlanhla and given him permission to sell it to buy a jumping saddle. A mention also goes out to Dee Palm who is helping him find the right saddle. Nhlanhla is now one step closer to achieving his goals thanks to your generosity. 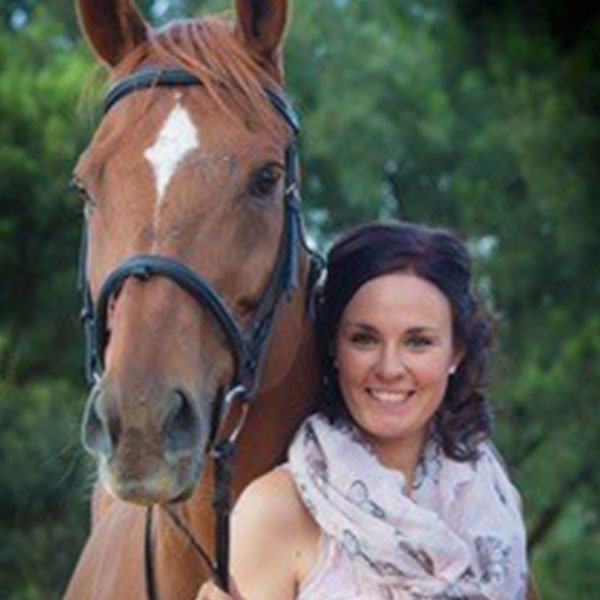 “I am 29 years old and have been teaching since the age of 21. All ages, levels and disciplines.

I have taken numerous riders through SANESA, some of which won their level of competing.

I myself, have competed in dressage shows up to Novice level but doing Elementary level at home.

I also have qualifications in disabled as well as therapy riding, and I have done my Level One Horse Behaviour course through the Ethology Academy.” – Renske 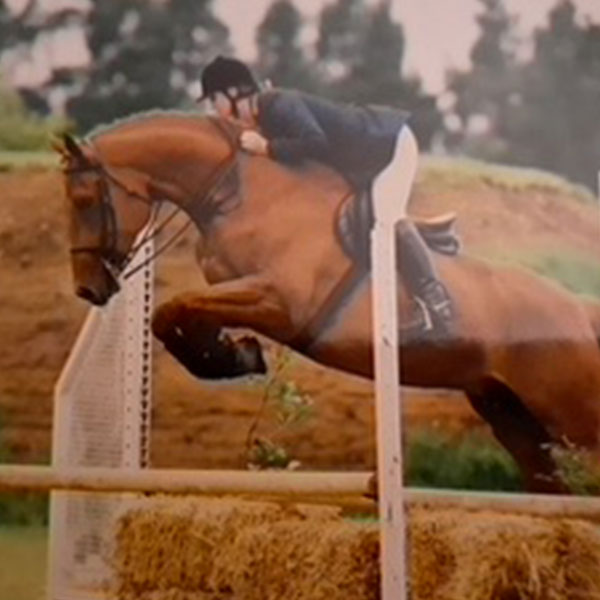 Sharon was born into a horsey family – her mom and sister also rode and competed successfully for many years. She learnt to ride all kinds of horses and ponies by backing and schooling youngsters to sell on.

She brought on her thoroughbred to jump JA and Adult B grade successfully.

She has completed for more than 30 years in jumping, showing and eventing and has been selected for the Gauteng Central team for showing and dressage for several years.

Sharon was selected for the SA Jumping Team at the Inter-Africa Cup at Easter Show in 2010.

She has backed and brought on numerous horses from thoroughbreds, welsh ponies off the mountain and warmbloods who went on to compete successfully.

Sharon competed in junior and adult open equitation and was in Gauteng team for equitation for several years.

Sharon is a great asset to Riba Stables as a part-time coach. She is kind, patient and extremely knowledgeable, taking great care of the well-being of all the special horses and ponies at the yard. 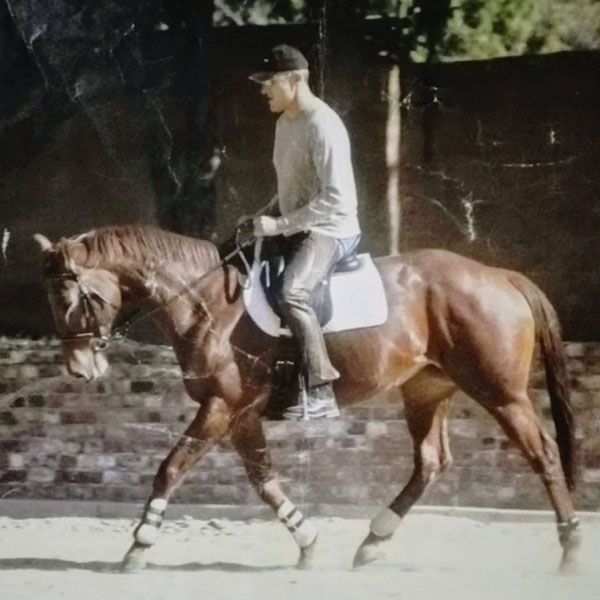 Willie started in riding in Cape Town with Paul Garlicki.

After the army, he worked at Chinta Park for 21 years until the yard changed ownership – during this time Willie rode and worked with Dominey Alexander, Adriaan van Wyk, Susan Bass, and Jonathan Clark.

Willie is mainly a showjumping coach but also did compete in dressage up to Novice champs level.

He jumped several horses up to 1.35m

He also evented a little at Novice level and competed at Sappi Horse Trials.

Willie has dedicated his life to coaching kids and junior show jumping riders.

When the schools league sent a Junior School Springbok showjumping team to Australia, Willie was the team coach – out of 85 teams, their team achieved 6th place.

Anke Lampen and Emma Deetlefs were two of his good junior pupils who went on to achieve a great deal.

He has been a coach at Riba for approximately a year and is very popular with adults and children alike. 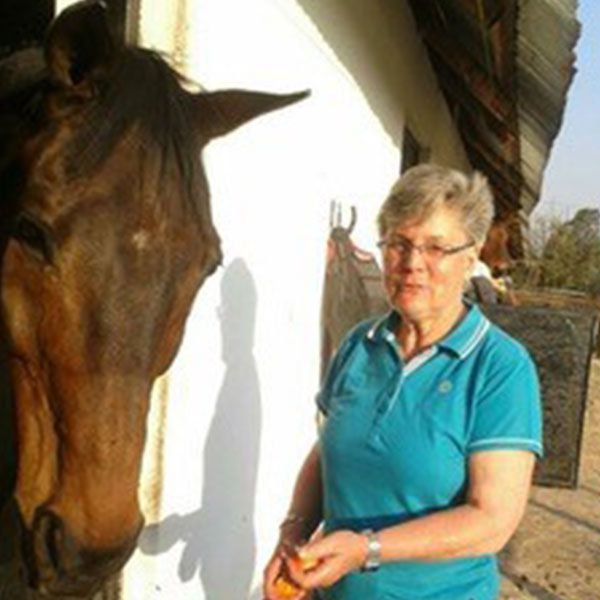 Willy van Ek has been involved with horses her whole life. She is our Accounts Manager. She is 75 years old and has an old, retired thoroughbred at Riba Stables.

For many years, she ran Pony Club in the area which is sadly not as strong as it was years ago but it was an invaluable part of the equestrian upbringing of all pupils. 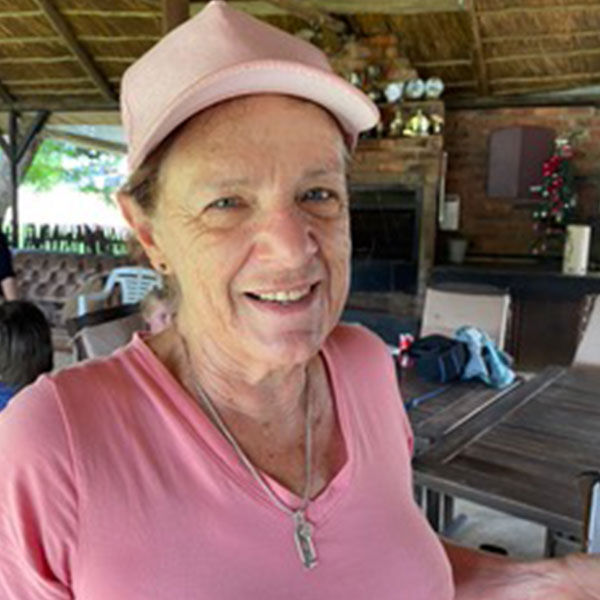 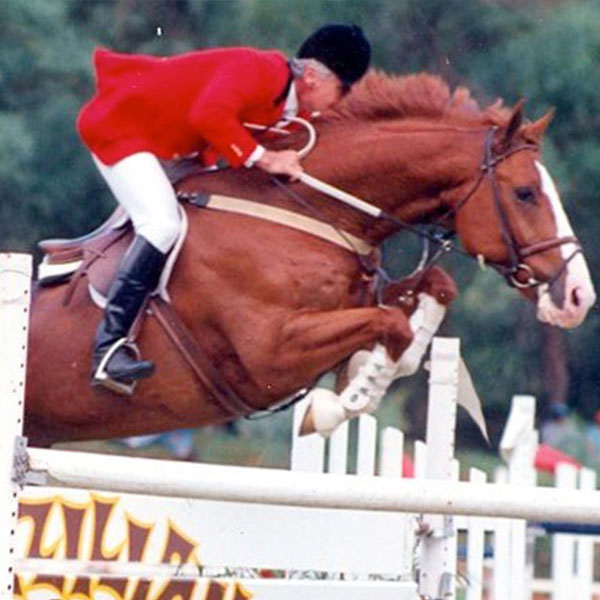 IN MEMORY OF – Errol Wucherpfennig

Although Errol is widely known, respected and endeared by the South African and International riding community as one of the world’s top show jumpers in his time, it is also his ability in the workplace which truly stands out and illustrates his diverse capability.

His enterprising character-focused methodological approach and intelligent flair as a sportsman.

Errol is a well-known legend in the horse riding world and has won almost every major showjumping title during his career.